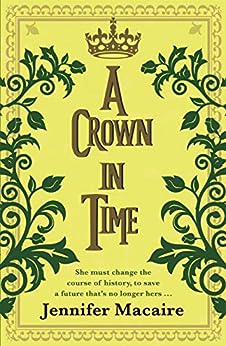 Jennifer Macaire has a knack for transporting the reader in time, alongside her characters. In A Crown in Time she brilliantly depicts the raw and unforgiving era of the Crusades. The moment you step into the story, your senses are assaulted with images, odours, sounds and textures that all come together to sweep you off your feet and take you right into the black heart of the Dark Ages. Macaire knows her stuff. She comfortably navigates the era when and the areas where her book is set, and you as a reader know that you’re in good hands. Gone is the vague romanticism of the Crusades and in comes the stench of death, dysentery and unwashed bodies.  The sea crossing to North Africa and back left me reeling with sea-sickness. The brutality of human interaction in those days made me thank my lucky star that I was born eight hundred years later.

Then there are the characters. Isobel, the woman who travels from 2900 to save the French dynasty, isn’t a pre-progammed robot. She is fallible. She makes mistakes. She is unsure about her task. The threat of time-erasure hangs over her head and she doesn’t quite know how to avert it. Things go constantly wrong and she responds as best as she can. You can tell she is lost and that she is on her own. She not only needs to fend for herself (and that’s not an easy task even for her medieval contemporaries), but she also takes it upon herself to take care of Charles, her streetwise orphan sidekick. And of course she is tasked with protecting Jean, the future father of the kings. She invests herself in that task on more levels than one. And it doesn’t quite go to plan. But she has to go on and every new chapter is filled with new challenges.

A visceral read, full of passion and heart.