Tired of all the doom and gloom around me, I decided to reach for something that would cheer me and draw me into a different world. I have certainly found it in An Officer’s Vow. It is a classic Regency romance with a pinch of adventure and good dose of genteel humour. In this book you will find everything you would expect from Regency romance: an endearing and feisty damsel in distress, a handsome but somewhat insecure around the opposite sex veteran of Napoleonic wars, greedy and unscrupulous fortune hunters, cold-blooded spies and an array of unforgettable characters. You will hurtle from one misadventure into another at a gallop, with little time to catch your breath.
Hampson is clearly on a first-name basis with the era. She conveys the setting details and the linguistic style of that century with ease. You feel like the book was written two hundred years ago by the likes of Jane Austin.
All in all, I relished every minute of this delectable story. 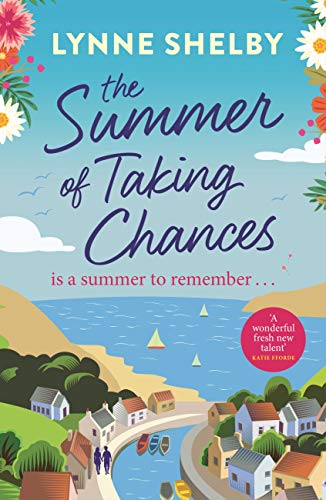 The Summer of Taking Chances by Lynne Shelby has it all: a picturesque and tranquil seaside village of South Quay, the height of hot summer, a handsome heart-throb and an emotionally intelligent heroine, Emma, who relays to us this romantic tale.

It is a tale of two people, Emma and Jake, who were once intimately close and now have a second chance to fall in love. They have plenty in common. Acting is one thing that binds them. Emma plays the part of Juliette in an amateur production of Romeo and Juliette. Jake is a fully-fledged film star. She is single. He has recently broken up with his girlfriend. He doesn’t seem heartbroken or on the rebound. Old school friends, the two of them are relaxed and at ease with each other. Particularly charming are their exchanges where they aptly use Shakespearean quotations to quibble with each other and laugh at their very own, inside jokes. All other young and eligible ladies in South Quay are swooning over Jake, but he seems to only have eyes for Emma.

Yet, not everything is as it seems. While we take a stroll on the beach with Emma and Jake or join them at a party, watching them grow closer and closer, we also learn about their common past. Shelby reveals small bits of their history, one at a time, through Emma’s eyes. We discover height of emotion and depths of pain, and we wonder: will that past be an obstacle to their future?
The Summer of Taking Chances is beautifully written and absorbing. It has depth and many three-dimensional characters not limited to Emma and Jake. It is a poignant and absorbing read. Highly recommended. 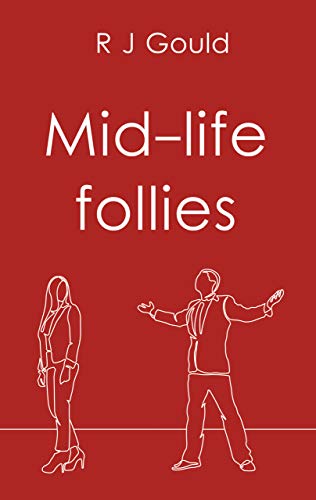 My husband has recently embarked on an ambitious project of semi-retirement and is rattling about the house, making himself sound and look indispensable. Trying to understand my semi-retired spouse, I reached for R J Gould’s Mid-Life Follies. I was intrigued by its premise: Hugh retires from many years in education, ready to sail into the Golden Age of idle pleasures in life. Instead, he finds himself in thralls of mid-life crisis brought about by some unexpected developments. It seems like his wife Liz is having second thoughts about their marriage.

The story takes us through their life together, both from his and her perspective while in the present time, they battle with doubts, temptations and mistakes, and the reader travels with them to see whether their marriage is strong enough to overcome them all. This book reminded me of Us by David Nicholls. Just like Us it dissects relationships at a stage when it is no longer about impulses and more about self- and mutual discovery.

Mid-Life Follies is witty (there were moments where I laughed out loud) as well as insightful and reflective.  The characters are real – the sort of people you may have met and would find easy to relate to. They are well-fleshed out and multi-dimensional.

I really enjoyed this story and will read more of Richard Gould. All in all, a funny and perceptive tale. Highly recommended.

Still Me is a third book in a trilogy. I hadn’t read the first two, but that didn’t matter. The story is so skilfully developed that I just dived into it and in no time felt like a little fish frolicking in a friendly pond. All the characters were fully fleshed out and multi-layered. They weren’t just cardboard cut-outs, but talking, feeling, walking people complete with their shadows, their past, their secrets and their quirks. Their stories flew and crossed with one another, and all of them were delivered to a satisfactory resolution. New beginnings, heart breaks, up and downs, injustices and small acts of kindness were assembled together to create a rich background to what, in essence, was a classic love story.
Heart-warming, life-affirming, sweet, uplifting and adorable are the kind of superlatives I wouldn’t hesitate to use to sum up Still Me, and that’s some compliment because I am not a romantic. I enjoyed it just like I sometimes enjoy a box of chocolates, which always takes me by surprise as chocolate isn’t my thing. 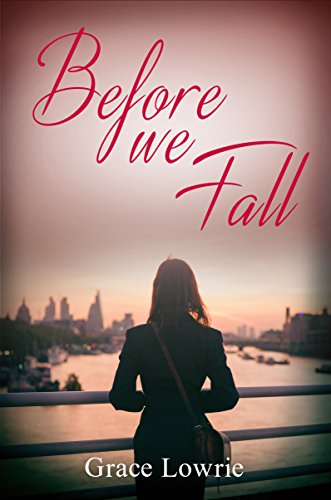 Grace Lowrie does not shy away from dilemmas. She puts her characters in difficult situations and lets them make their own choices. The challenges she poses to them are unique. There are no templates in Lowrie’s stories, no candyfloss.

In Before We Fall, upon being diagnosed with cancer, Cally makes a bold choice to run away from everything she knows and holds dear in order to live what is left of her life to the fullest. She could choose to undergo treatment but prefers to indulge in hedonistic carpe diem. She goes to London where she becomes a pole dancer and meets the moody guy next door, the reclusive artist, Bay. Two beings on the edge of life, they are instantly attracted to each other. Their first encounter, prickly at first, slowly morphs into a turbulent, sexually charged relationship.

I was drawn into this story from the first page. It is both emotionally intense and reflective at the same time. It runs deep into the human psyche and into the mortal condition that is life. The prose is smooth and does not intrude on the story; the characters are complex. An absorbing read! 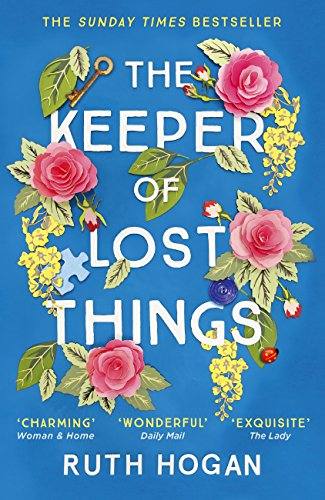 Refined subtlety!
Yes, it is a ghost story, but ghosts don’t fly in your face, howling BOO. They just stay in the background and keep their invisible finger on the pulse of the story.
Yes, it is a love story, but with no saccharine stirred into it, or heavy sighing anywhere within an earshot. Love reveals itself steadily and inescapably.
In short, it is a beautifully crafted story which transcends genre. In fact, it is more than one story as three distinct sets of relationships (Eunice-Bomber, Andrew-Therese and Laura-Freddy) weave in and out of focus, and become entwined. The people populating this book are wonderful. They are the sort of people you would love to make friends with. Sunshine is a masterstroke of loving-tender characterisation. Wait till you meet her and you’ll know what I mean.
And finally, the lost things are characters too. Each of them tells its own amazing story: a blue button, a piece of a puzzle, a little red umbrella.
The Keeper of Lost Things is an original and humble book that can’t help but endear itself to the reader. 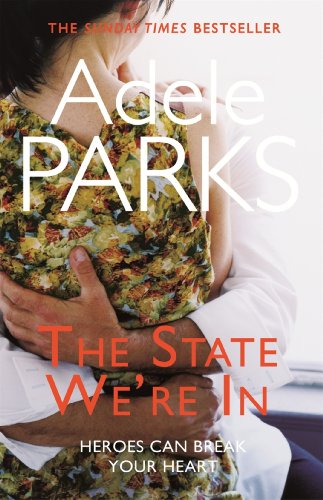 There are four narrative voices in The State We’re In: two of the ‘baby boomers’ generation, Eddie and Clara, and two in their thirties: Dean (Eddie’s son, abandoned by his father at six) and Jo (Clara’s loved and cherished daughter). Their lives criss-cross in the course of the story, as do their narratives. The baton of the narrative is passed from one character to another as they present their own takes on the same events and nudge the story to the next stage. The prose is vibrant, light and flows well, but for me there was a little too much of psycho-analysis and introspection going on at the expense of the actual action. I was told, rather than shown, what the characters were like. This was a bit overcooked.
The State We’re In is a romance mirrored across those two generations in a quite contrived way which doesn’t quite ring true for a cynic like me. This is because I’m not your typical romance reader; it isn’t a genre of choice for me. I found the coincidences bemusing rather than engaging; Jo was entirely irritating and Dean stereotypical in his macho-man ways, even when he warmed up to Jo, because then it all became predictable.
The ending didn’t grab me.
However, The State We’re In is a good book. It chronicles generational mores, times and ways of life really aptly. 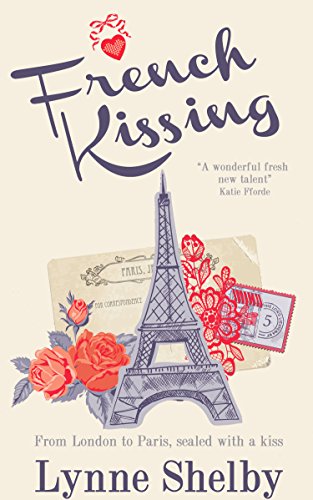 The story starts with letters written by the awkward and inexperienced hands of two children: Anna from London and Alex from Paris. At first, they don’t know what to say to each other. Anna is practising her French, Alex his English, but with time, intimacy of friendship grows between them. This is reinforced when they meet face to face and spend some time together. They are mates. They can trust each other. They have the purity of true friendship between them.

Then, years later, Alex arrives in London. He is no longer a pimply teenager – he is a handsome young man with a broken heart. Anna’s friends compete for his affection. Anna’s boyfriend is jealous of him. And the reader begins to think that Nick is right even though both Anna and Alex would swear there is nothing going on between them. Because there isn’t, except…

Lynne Shelby weaves the intricate lace of their transforming friendship with great insight. Her characterisation is vibrant, but realistic. She shows their vulnerabilities, changes of heart, their self-discovery and their doubts with subtlety and without making things too obvious. You know how it is going to end. You will them in the right direction, but there are twists and turns along the way, which keep you on the page.

The atmosphere of bohemian Paris is expertly created. The reader feels drawn into the city.

Reading the book, I felt this could be another You’ve Got Mail waiting to be made into a movie.

Funny, full of colourful characters (with Mitchell really standing out in the colour department), warm and fuzzy. Real people and real language. The builders stole my heart. My only concern was this: who would milk Pat the Cow???

A simple, plain man is on a mission of saving his family. He blunders about without much hope even though he plans everything with military precision. I am relishing this book – still reading and re-reading it.

It isn’t a book that you must finish quickly – rather savour it slowly and enjoy every gem of his wit and style. You will be taken on a journey, and that is precisely what the book is – a journey across Europe and across a man’s life.

There is poignancy and humour, characters who are perfectly imperfect and stoicism in the face of the world rolling over Douglas’s life.

BOOKMARKED REVIEWS
Create a free website or blog at WordPress.com.