The Invisible Library is a mystery of a missing book, an extraordinary edition of The Grimm Brothers’ Fairy Tales. The book, which is a unique collector’s item, has been stolen and its owner murdered. Irene (a librarian-cum-spy) and her assistant, Kai, travel to Victorian London to search for the book.
Until this point, a potential reader would be justified in thinking this was yet another historical mystery. But Victorian London is only one of many versions of itself. Cogman’s world consists of many such alternatives. Each universe features an array of beings other than humans: vampires, fairies, shape-shifting dragons, to name just a few. Zeppelins fly overhead. Robotic caterpillars, remotely operated alligators, silverfish and all manner of bizarre creatures get in the way of the investigation. However, finding the book is a matter of life and death, and the librarian’s nemesis, Alberich will not hesitate to resort to trickery, murder and corruption to get his hands on the book. Ancient Language and magic are used, alongside more conventional methods, by all sides to defeat the competition. Alliances are formed slowly and mistrust has to be overcome in action.
I enjoyed the quest aspect of The Invisible Library and found the concepts of the many alternatives of real places and times very intriguing. The idea of magic being a by-product of destructive chaos is original and curious.
I would have liked Cogman to have perhaps fewer magical creatures, but to develop each of them in greater detail and give them more distinguishable features. As it is the vampires are not that different from the fairies, or indeed the dragons.
Overall, a pleasant fantasy read.

There is something distinctive and distinguished about Tim Stretton’s books. It isn’t just the elegant and precise prose that instantly takes you out of your present location and throws you into something rich, luxurious and intriguing. It is also the setting in time. You open the book and instantly find yourself in an alternative universe and living through alternative history – alternative but very real and believable.

“Bitter Sky” is a steampunk fantasy, but again the setting feels as if it is a snapshot from history – it feels authentic though you can’t quite pinpoint the exact moment in time where it comes from. Despite that, you have this distinct impression that you read about it or studied that period in school. You find yourself somewhere in Germany, perhaps at the turn of the twentieth century. There are hydrogen-powered airships and steam trains/carriages. They would have been experimental in those days, but in “Bitter Sky” they are fully-functional, tried and tested weapons. There is the strife of a small territory to secede from the powerful and dominant empire, to reject tradition and monarchy, and establish its own identity. The small territory, Lauchenland led by its revolutionary elite called Volksbund, has ambitions beyond mere independence: it declares war on the Beruz Empire. The Empire strikes back. I was fascinated with how the author built that world from fragments of history. I delighted in detecting nuanced references to the unification of German states under imperialistic Prussia’s rule, or the degradation of  the lofty principles of freedom and equality of people in the reign of terror and bureaucracy that followed the French and Russian revolutions. “Bitter Sky” is full of historical analogies cleverly dressed as fantasy and presented in a vibrant, action-packed fashion.

“Bitter Sky” is a pacey and dramatic war romp, complete with air battles, morally questionable bombings, tragic casualties and grand victories. But there is more to it. There is the human factor. The von Eck siblings, Erich and Saskia are torn between their aristocratic loyalties to the Empire and their citizen duty to fight for their country, Lauchenland. Erich joins the fusiliers on the side of the Empire and Saskia becomes an airship navigator with Lauchenland Air Corp. Again, historical references spring to mind where nations divided by borders found their people fighting – and killing – each other on the opposite sides in the Great War and WWII. Stretton captures that torturous dilemma between duty and loyalty, between following and questioning orders and between glorifying and dehumanising war. He doesn’t idealise or side with anyone. The Empire has its faults as does the belligerent republic of Lauchenland. There is a thin line between good and evil, victory and defeat.

The conclusion of this book was ingenious – tense and ultimately, very satisfying. It tied together all the loose ends, linked to the opening chapters and neatly encased the story. Tragedy and fatalism, black magic and characters caught up in events beyond their control bring to mind the dark fairy tales of yesteryear. If Hans Christian Andersen was to write a tale for adults, he could well have written “Bitter Sky”.

I had to double-check the date this book was first published. It was in 2017. Already then, the author had the insight of what it may be like when a pandemic strikes: the origins of the virus, the so-called “Bat Fever”, the vaccinations, the quarantine, the panic, the unrest, the control measures, the lies, the whole world falling apart. Tyler’s projections in “Tipping Point” are spot-on! And they will send a cold chill down your spine.

I was swept in the currents of the unfolding catastrophe, following Vicky and Lottie’s escape from the quarantined town of Shipden, their precarious journey to the safe house and Vicky’s desperate search for her partner, Dex. He and other activists belonging to a group called Unicorn have uncovered a sinister plot underpinning the outbreak, thus putting themselves directly in harm’s way.

There are many interlinked threads and subplots in this story with both very personal and intimate themes as well as broader social and political observations. Those are deeply unsettling, firstly because of how probable and imminent they appear to be; and secondly, because of Tyler’s nuanced and realistic characterisation. Every character is astutely observed and so real that I found instant affinity with them. I could easily picture myself in their shoes, experience their fears and think their thoughts.

“Tipping Point” is a crushingly prophetic tale of societal degradation on the one hand and the power of human spirit on the other.

I must confess I haven’t read Neverwhere and, at first, I was a bit lost in this short story. But I quickly found my way by simply following the Marquis de Carabas who in his turn was following the scent of his extraordinary coat stolen from him in mysterious circumstances. We have traversed most puzzling worlds of Below London where tube stations come to life to become characters in the story. Thus we have the Elephant, Victoria and the frightening Shepherds of Shepherd’s Bush. I found that world bewitching.

The Marquis de Carabas’s quest brought to mind another short story, “Overcoat” by Gogol. There too an owner unlawfully deprived of his precious coat moves heaven and earth to retrieve it, and not even death seems to be able to stop him. The coat represents his life. Here too, the coat has given the Marquis his name, his identity and his direction in life. Without it, he is incomplete. His older brother, Peregrine, is his guardian angel in the (many) hours of need.

I have reached for this story because I loved Good Omens and I wanted to discover a bit more about Neil Gaiman. I am hooked.

You open this book and you find yourself in a world that is bizarrely familiar yet utterly outlandish. It feels like the second coming of Animal Farm. Animals (particularly rabbits) are on a collision course with humans, and if you have a shred of humanity in you, you are on the side of the rabbit.

Fforde’s portrayal of our twenty-first century society is spot on. You recognise the characters, the events and the trends: UKARP, a right-wing party led by a PM going by the name of Nigel Smethwick, a TwoLegsGood movement of middle-class reactionaries, the entrenched perceptions of an “unbridled” rabbit infestation/invasion on the green shores of Britain. We are talking rabbits, the little furry animals native to these isles. They were here before us. They fully anthropomorphised in 1965 and continued to multiply in their usual rampant way. The more they started resembling humans the less acceptable and more inconvenient they became. They had to be separated from humans and ghettoised in a new MegaWarren in the depths of Wales.

This story is hilarious. The world Fforde has created (and based on our very reality) is astounding in its every detail, and it is funny because it is so relatable. There is pure observational comedy there that will leave you with a laugh-out-loud bellyache. But this story also hits a nerve. It is a satire about the decline of our society, the loss of what once was a clear moral compass but has now become a murky moral muddle, about the unrestrained rampage of bigotry and intolerance.  And about good people caught in the middle of it, scared, suppressed, but hopefully still trying to do what’s right.

I loved this book. 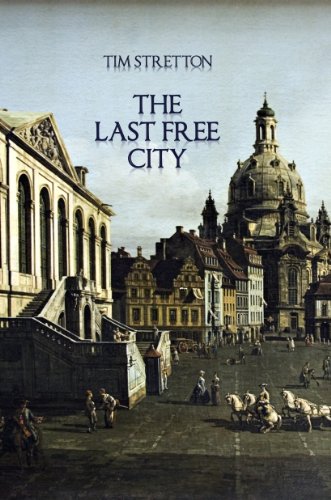 The Last Free City is a feast of political intrigue, cunning diplomacy, swordfights and assassinations, love, lust and betrayal – and that’s just for starters!

The story is set in one of the last independent city-republics on a peninsula torn between two expansive kingdoms, that of Emmen and Gammerling. This may be fantasy genre, but the settings have a strong historical flavour of Italy before unification. It’s evident in the names, the architecture and the social hierarchy of the city of Tarantanallos. So despite this being a fantasy novel, you will feel like you’ve travelled back in time. It somehow seems authentic and historically accurate. But there are also touches of sheer imaginary ingenuity by the author who has created a self-contained world in its own right, with its own currency, its law enforcement agency called the Consigli, its ruling elite of Specchio, modes of transport astride gallumphers, and time measured in pursuits and activities. Thus you have the Hour of Evening Repast, the Hour of Secret Deeds, the Hour of Noble Pleasures… And so time flies while you’re having fun doing all sorts good and bad things.

Lord Oricien arrives in Tarantanallos in order to secure the city’s submission to Emmen. Factions of influential elites are formed. Nobody can trust anybody. Fortunes are to be made and lost. Dravadan, one of the most powerful and brutal leaders of the city, works on the alliance and the furtherance of his own interests. His younger brother, Malvazan, nurses his resentments while at the same time polishing his fencing skills so that he can climb the greasy pole of influence despite being the second son. Todarko, a poet and skirt-chaser, tries to ignore politics and follow his heart even though it may lead him into the eye of the political storm. The characters are vibrant, complex and full of surprises. That includes the female characters. They are rich and diverse – from impetuous, through treacherous and manipulative to the most noble ones.

The story is written in elegant prose, full of witticism and laced with brisk, intelligent exchanges. The author attributes the inspiration for Todarko’s sonnets to Shakespeare. There is something distinctly Shakespearean in this story, and it isn’t just in the sonnets. It’s in the language, the vivacity, the settings and the elaborate plot. If you want to lose yourself in a world away from home (especially during lockdown), read this book.