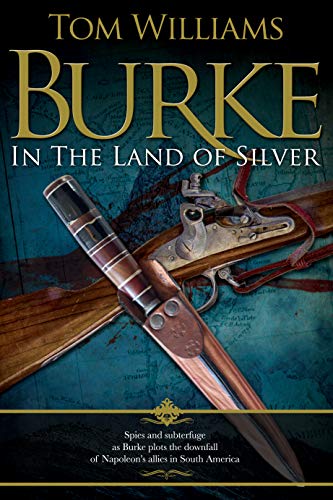 We meet James Burke as he fights the rebellion of black slaves in Saint Domingue. At the time he serves a French master, King Louis XIV. Boukman, a legendary rebel leader, accurately foretells his own death and Burke’s fortunes, telling him that he will have hand in building a new nation. And so the adventures of Lieutenant Burke begin.

Fast-forward through the French Revolution to the Napoleonic wars, James Burke is now in His Majesty’s service, dispatched to Buenos Aires on a spy mission against the French. A gentleman, he finds it uncomfortable to take on the role of a leather merchant and having to learn the ropes from the obnoxious O’Gorman. Burke’s discomfort is soothed by the presence of O’Gorman’s beautiful and intelligent wife, Ana.

Once in Argentina, Burke takes us on a roller-coaster journey through the Andes and many life-threatening exploits. Once you’re there, you will have no option but to press on and turn those pages fast.

Williams’s spy adventure series is a cracking, fast-paced read, rich with historical, military and geographical detail. I can’t wait for book two in the series.